Come along to a rehearsal to hear what we do; all visitors are welcome especially if they have a voice! New members join an established Choir aiming high, and the quality and reputation of our singing and performances improves year on year.

LMVC’s only stipulations for membership are loving to sing and being able to hold a tune. We know an unused voice takes time to develop, so we’re not expecting Pavarottis, Paul McCartneys or Gary Barlows from day one. So relax and just give it a go.

New members are supported by other experienced Choir members in the early days, and the atmosphere in rehearsals is friendly, non-judgmental and welcoming.

Young or not so young get in touch to see if LMVC is for you.

The question is not what choristers do when they give up singing. Indeed, with honourable exceptions, for many, singing in a choir is what they do when they have given up other things… like work and ambition. 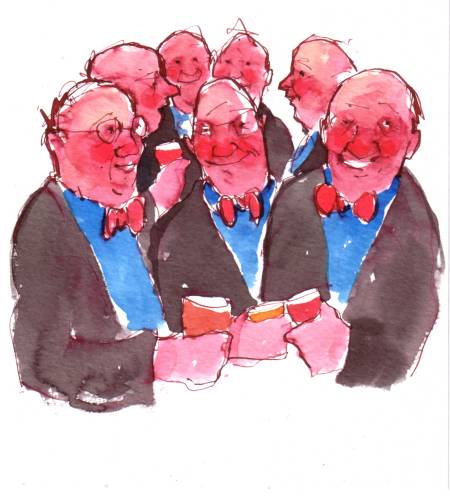 As in “après ski”, the appropriate response to the end of a rehearsal or a concert is often a visit to a local hostelry for refreshment and conversation. In as far as “post match analysis” is concerned, it tends not to dwell on the triumphs. A typical range of contributions might include:

“What were the baritones doing, drowning out the only melody we get in the whole evening?” from a second tenor; or “I thought there were only supposed to be two bass parts but I could hear at least four where I was standing.” from another second tenor; or “Amazingly, the piano went sharp half way through the piece” from the musical director “just after the unaccompanied section”; or “When will the announcer manage to remember where we are performing and what we are singing?” from members who have never stood up in public and come face to face with the truth that this is the precise circumstance when the brain fails to function. 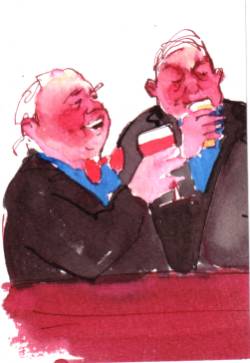 But it would be a mistake to think that the talk is always shop. Sometimes it is entirely practical. It would not surprise the author if he has been drinking with the world’s experts in winter sports insurance policies for the over 70s with diabetes and various other unmentionable diseases at a price that does not involve selling the family home. Sometimes discussion is arcane, unless you happen to be interested in who batted at number six for England in the Trent Bridge test match in 1972. However, occasionally the subject matter is topical, relevant and important.

The great question of the moment is: should “voice” be deleted from the choir’s name? Clearly it is unnecessary to include the word since “Male Choir” would adequately convey the nature and purpose of the organisation, but what is the point in dropping it? “Well…” (the deep breath, slow delivery and humourless expression fills the listeners with dread) “…consider the possibility that a woman with a deep singing voice wanted to join us. If we turned her down she could sue us on the grounds of sexual discrimination.”

“It would be particularly difficult to contest her claim if she had a moustache” piped up someone hoping vainly to divert the speaker.

“It’s no laughing matter. All the big Welsh choirs have changed their names for this reason” said the humourless one (a recently retired Health and Safety jobsworth) reasoning that the chairman and others would be impressed by precedents set in the Principality.

“Don’t be ridiculous” interjected an impatient tenor who claimed to have some knowledge of the law and was irritated by the interruption to the unending analysis of the reasons for the English cricket team’s disastrous performance in defence of the Ashes “it is perfectly obvious that you have to be a male to have a male’s voice.”

“What’s the problem with letting women join us?” asked a laconic bass. “We could do with a bit of support for our few tenors!” He continued “It could sort out a number of our other problems. For example, women are so good at organising, we might even find one who would take over as the next chairman and let the poor bugger doing it now get a bit of rest.”

“The poor bugger doing it now would hate to step down” claimed a cynical baritone. “His main reason for carrying on is to have a good excuse to get away from the women in his house!”

When glasses are called for and outlying members poured into taxis the general consensus among those passing water before the walk home is that it all sounds like “political correctness gone mad” and that other clichéd no-no for kindly folk increasingly out of touch with what’s going on with the climate, global markets and other things that move without ceasing “change for change’s sake”.

The last comforting words are spoken as choristers’ homeward paths diverge at the corner past the church: “Another evening well wasted!”
Illustrations by Twink Addison. 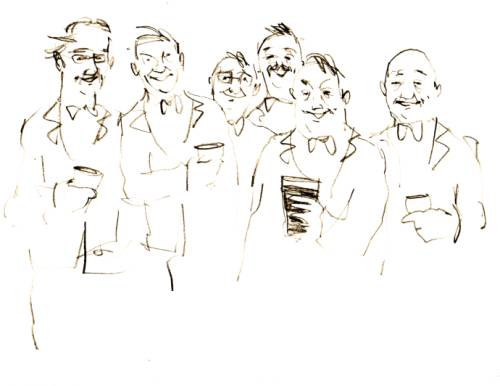