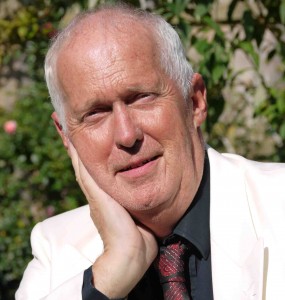 Graham Burrell has been the choir’s musical director for over twenty eight years. He has developed the choir’s capabilities to the extent that in recent years it has won awards at the Eskdale Music Festival in Whitby, high marks at the Mrs. Sunderland competition in Huddersfield town hall, notable appearance at the Llangollen International Musical Eisteddfod, and has won several trophies at the Cottingham Music Festival. Graham is also an accomplished pianist and organist.
“I moved to Louth in 1984 from Nottingham, as a music teacher working near Louth, and joined the choir as a 1st bass in January. The musical director, Ray Harniess, was looking for an assistant conductor, and, somehow, within a year I had taken over, with the choir having to put up with me ever since! Despite that we have made progress through the years, and have gained several trophies. It is one of the most rewarding parts of my life, and I enjoy Tuesday evenings and concert performances alike. I have been married for 24 years, and we still live in North Thoresby, where I am the village organist. My interests include gardening, photography, music and travel – I gained my pilots licence many years ago, before vertigo brought an abrupt landing! Despite still teaching in Grimsby, the choir constantly throw up new challenges to keep me young -I wish! It is a privilege to work with such a devoted group of singers, such a talented musical team, and a dynamic committee to push the limits of the choir and its standing within the town.”

John Hards, well known for his salacious wit, is the new member of the team.

Shy and retiring, John has always been musical. As a child he used to play on the linoleum, and even now he can whistle and tap-dance at the same time. His ambition, he says, is to sing the Queen of the Night aria from Mozart’s The Magic Flute.

“People who don’t know me think I’m quiet, people who know me wish I was.”

Gwyn began his career as a French teacher in a boys’ grammar school in Cheshire. He

remained in education for 35 years, the last 17 years as Head of a comprehensive school in West Yorkshire. He retired with his wife Anne to “La France Profonde” where he joined a choir called “A Travers Chants”. Returning to England and Louth in 2004 he seized the opportunity to join both the Choral Society and LMVC. Gwyn sings as a first bass but mainly now accompanies and considers himself very fortunate to be involved with such a fine choir.